To Zaretsky with Love

In each of the Zaretsky pieces featured in this journey, I found a cool theme: highly decorated, exuberant designs flitting around a soulful portrait of a real woman. A woman with history, hurts, stories and views, all kept inside as she sits for her portrait, and betrayed only by her fixed gaze. I love it. I love how his pensive, real-life women look out, surrounded by frenetic, candy-coated backdrops. I know I can relate.

To capture the blue gown and circusy background of A Girl in Blue I used lots of African glass beads because their saturated colors wouldn’t let me down. The mottled cobalt powder beads were a new find for me at the Tucson Gem Show this year. I discovered these and the yellow rice beads at Mb Konateh‘s booth. The colorful African seed beads here are (delightfully) called Christmas Beads, though no one knows why. A vintage gold diamond charm from Findingmore gives a nod to the harlequin pattern of Girl’s dress.

To capture the look of Portrait of Olga Kravchenko I used the same powder glass beads from my first piece, but added some striking, geometric brass elements. See, I thinks Olga looks like a really gorgeous, disco diva. “Big hair, gaudy gold jewelry, don’t care.” So I used a classic African wound brass circle to make a disco-style pendant (of course). Wound brass bead and brass barrels from Bead Paradise. I made the clasp from a raw brass bail found here.

I had fun with this one. I loved the energy of the Nastya piece, but I think I especially enjoyed the elements that hearkened to Picasso’s harlequin mood: a pensive model, checkerboard diamonds, the serenely rosy hue. But who can ignore those flowers in her hair?! Those things take center stage. So I focused on Nastya’s flowers and flowered dress for the scale and study of my piece. Oversized paper beads (similar ones found here) capture the bold floral of Nastya’s dress while a red wool pompom can only hope to grab as much attention as Nastya’s flowers. Blue ceramic washers from Greece and ice blue barrels from Africa play counterpoint to the russet palette. For the clasp I used a coin button that came on a strand of Indian beads from my stash.

Eugenia was my favorite piece, probably because I finally got to use a long-cherished hand painted pendant from Russia. This pendant is so lovely, and perfectly captures the warm brown of Euguenia’s dress and the red poppies around her. I do not remember the artist’s name, but I’m including a picture of the back of the pendant – so glad she signed her work! Orange glass beads from Nagaland and big padre beads from Indonesia are a nice pop. The vintage lime green millefiori beads (find similar ones here) lend just the right electric green hue. And they’re floral! I love when it all works out so well 🙂

When not watching some school sporting event (she loves it) Anne lives and beads in Illinois with her husband and five kids. Anne has been a maker for as long as she can remember. She started making jewelry in junior high on a babysitter's budget and began designing jewelry professionally about ten years ago. Anne loves the beat of different people and different places and her work is heavily influenced by global cultures and design. She is the author of _Global Style Jewelry_ (Interweave 2016). You can find her pieces on etsy at HandmadebyAnnePotter.etsy.com and online at annepotter.com 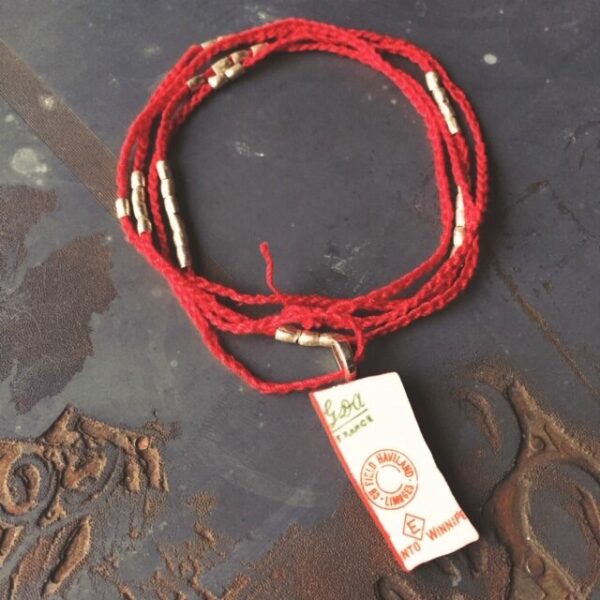 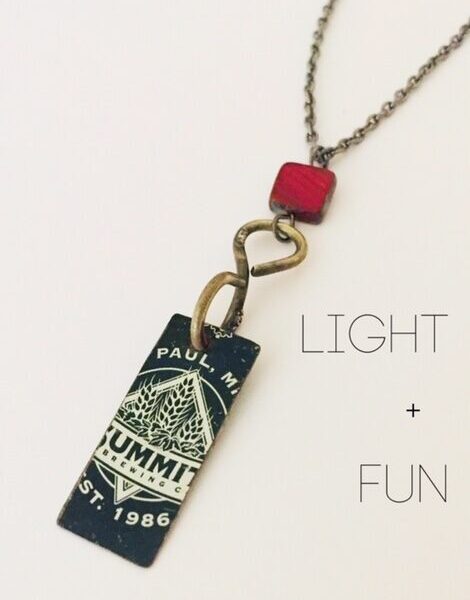 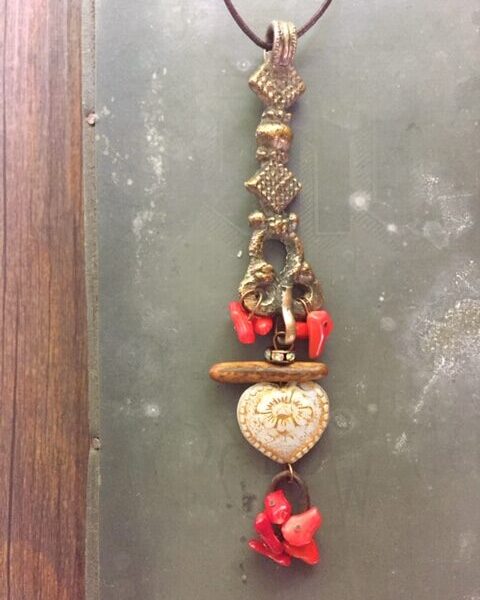