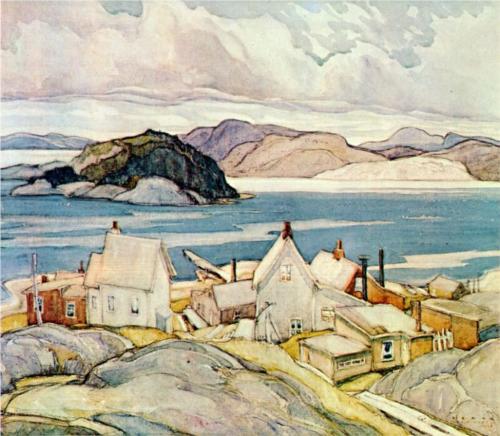 Jackknife Village, 1926
Franklin Carmichael
Watercolor on Paper
(Please note this art is copyrighted and is to be used only as inspiration.)
About the Art
In step with the fashions of the times, his work increasingly reflected the flat, simplified design popular in the 1920s.
During the late 1930s and 1940s, he branched out and worked on wood engravings and linocuts, all with the same precision and rhythmic quality of his paintings.
About the Artist
Canadian artist, Franklin Carmichael, May 4, 1890 – October 24, 1945.
The youngest and original member of the Group of Seven, Franklin Carmichael was born in 1890 in Orillia, Ontario. His father was a carriage maker. Carmichael arrived in Toronto at the age of twenty and entered the Ontario College of Art, where he studied with William Cruickshank and George Reid. In 1911, he began working as an apprentice at Grip Ltd. for $2.50 a week. He then joined Tom Thomson and other painters who were training to become serious artists, joining them on weekend sketching trips. He moved to Belgium in 1913 to study painting but due to the war soon returned to his native Ontario to rejoin the other artists. Carmichael was greatly influenced by Tom Thomson and shared space with him at the Studio Building in 1914. He was also on the fringe of the group because of his difference in age and was closely associated with the newer members of the Group of Seven.
Along with A. J. Casson and F. H. Brigden, Carmichael founded the Ontario Society of Painters in Watercolour in 1925. He also founded the Canadian Group of Painters in 1933, which several members of the Group of Seven would later join. He taught at the Ontario College of Art from 1932 to 1945.
Famous for his watercolours, many of his paintings depict Ontarian landscapes.
Blog Tour
The Blog Tour deadline is June 26th.
Links must be added to the Art Bead Scene flickr page where you upload your entry.
The Blog Tour will be on June 28th.
Monthly Challenge Winners
Winners will be randomly chosen from all the qualifying entries on July 1st.
Our Sponsors
Our Sponsors this month are Tesori Trovati and Too Aquarius.
Please visit us tomorrow to see the prizes!
Featured Designer of the Week:
From all the entries during the month, an editor is going to pick their favorite design to be featured every Monday here on ABS. We want to give our participants more time in the spotlight! Our Featured Designer will be this Monday, so get those entries in soon.
How to enter the Monthly Challenge:
1. Create something using an art bead that fits within our monthly theme. We post the art to be used as your inspiration to create. This challenge is open to jewelry-makers, fiber artists, collage artist, etc. The art bead can be created by you or someone else. The challenge is to inspire those who use art beads and to see all the different ways art beads can be incorporated into your handiwork.
An Art Bead must be used in your piece to qualify for the monthly challenge.
***Beads strung on a chain, by themselves and beads simply wire or cord will not be accepted.***
2. Upload your photo to our flickr group. Detailed instructions can be found here and click here for a tutorial for sending your picture to the group.
Please add the tag or title JUNE ABS to your photos. Include a short description, who created the art beads and a link to your blog, if you have one.
Deadline is June 30th. Photos are approved by our moderators, if a photo hasn’t followed the guidelines it will not be approved. You may upload 2 photos a day.
What is an Art Bead?
An art bead is a bead, charm, button or finding made by an independent artist. Art beads are the vision and handiwork of an individual artist. You can read more about art beads here.
***A bead that is handmade is not necessarily an art bead. Hill Tribe Silver, Kazuri ceramic beads or lampwork beads made in factories are examples of handmade beads that are not considered art beads.
Beaded beads, stamped metal pendants or wire-wrapped components are not considered art beads for our challenge.***
p.s. If you have a blog, post your entry and a link to the ABS challenge to spread the beady goodness.
June Monthly Challenge
By Art Bead Scene Team 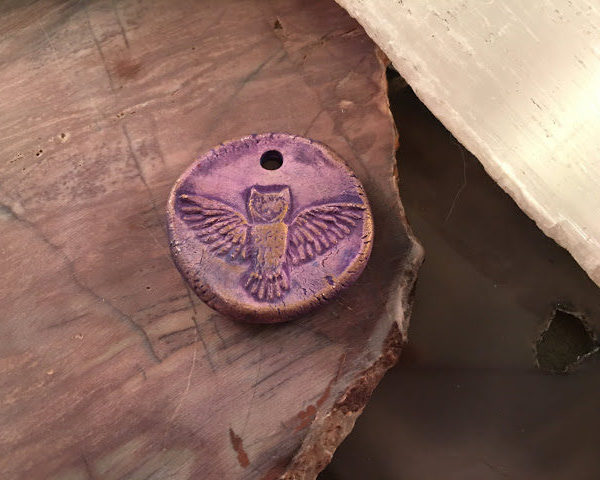