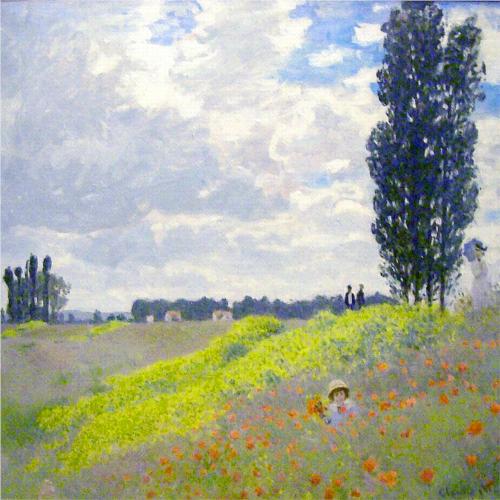 Walk in the Meadows at Argenteuil, 1873

Impressionism is a 19th-century art movement that originated with a group of Paris-based artists. Their independent exhibitions brought them to prominence during the 1870s and 1880s, in spite of harsh opposition from the conventional art community in France. The name of the style derives from the title of a Claude Monet work, Impression, soleil levant (Impression, Sunrise), which provoked the critic Louis Leroy to coin the term in a satirical review published in the Parisian newspaper Le Charivari.
Impressionist painting characteristics include relatively small, thin, yet visible brush strokes, open composition, emphasis on accurate depiction of light in its changing qualities (often accentuating the effects of the passage of time), ordinary subject matter, inclusion of movement as a crucial element of human perception and experience, and unusual visual angles. The development of Impressionism in the visual arts was soon followed by analogous styles in other media that became known as impressionist music and impressionist literature.

About the Artist
Claude Monet, November 14, 1840-December 5, 1926.
Claude Monet was in almost every sense the founder of French Impressionist painting, the term itself coming from one of his paintings, Impression, Sunrise. As a child, his father wanted him to go into the grocery business, but his heart was in the profession of artistry, and at age 11, he entered Le Havre secondary school of the arts. During his stay at the secondary school, he was known for the caricatures he would draw for the locals for ten to twenty francs each. Five years later, he met artist Eugene Bouldin, who taught him the techniques of “en plein air” painting and became his mentor. At the age of 16, Monet left school for Paris, where instead of studying the great artworks of the masters, he sat by the window and painted what he saw outside.
When he was twenty-one years old, he joined the First Regiment of African Light Calvary in Algeria, for a seven year tour. But his stay was cut short after two years when he was hit by a bout of typhoid fever, and his aunt arranged for his release, as long as he continued his art studies. Upon his return to Paris, he studied the “en plein air” methods, along with Pierre-Auguste Renoir, Frederic Bazille, and Alfred Sisley, and developed the painting style that would soon be known as Impressionism. Upon the outbreak of the Franco-Prussian War, Monet fled to England, also traveling to the Netherlands before his return to Paris, after which he exhibited many of his works in 1874, at the first Impressionist Exhibition.
Upon the death of his wife Camille to tuberculosis after the birth of their second child, Monet was resolved never to life in poverty again, and was determined to create some of the best artworks of the 19th century. By 1890, he was prosperous to buy a large house and garden, where he would continue to paint for the rest of his life.
As a painter of controlled nature, Monet’s garden was one of his biggest sources of inspiration. As such, he wrote precise instructions for his gardeners, with specific designs and color layouts, and amassed a large collection of botanical books. At one time, he employed seven gardeners at once. After his death of lung cancer, his only surviving child, Michel, was heir to the Monet family property, which has since been restored and opened to the public, including the vast gardens.
Blog Tour
The Blog Tour deadline is April 28th.
Links must be added to the Art Bead Scene flickr page where you upload your entry.
The Blog Tour will be on April 30th.
Monthly Challenge Winners
Winners will be randomly chosen from all the qualifying entries on May 1st.
Our Sponsors
Our Sponsors this month are  and .
Please visit us tomorrow to see the prizes!
Featured Designer of the Week:
From all the entries during the month, an editor is going to pick their favorite design to be featured every Monday here on ABS. We want to give our participants more time in the spotlight! Our Featured Designer will be this Monday, so get those entries in soon.
How to enter the Monthly Challenge:
1. Create something using an art bead that fits within our monthly theme. We post the art to be used as your inspiration to create. This challenge is open to jewelry-makers, fiber artists, collage artist, etc. The art bead can be created by you or someone else. The challenge is to inspire those who use art beads and to see all the different ways art beads can be incorporated into your handiwork.
An Art Bead must be used in your piece to qualify for the monthly challenge.
***Beads strung on a chain, by themselves and beads simply wire or cord will not be accepted.***
2. Upload your photo to our flickr group. Detailed instructions can be found here and click here for a tutorial for sending your picture to the group.
Please add the tag or title APR ABS to your photos. Include a short description, who created the art beads and a link to your blog, if you have one.
Deadline is April 30th. Photos are approved by our moderators, if a photo hasn’t followed the guidelines it will not be approved. You may upload 2 photos a day.
What is an Art Bead?
An art bead is a bead, charm, button or finding made by an independent artist. Art beads are the vision and handiwork of an individual artist. You can read more about art beads here.
***A bead that is handmade is not necessarily an art bead. Hill Tribe Silver, Kazuri ceramic beads or lampwork beads made in factories are examples of handmade beads that are not considered art beads.
Beaded beads, stamped metal pendants or wire-wrapped components are not considered art beads for our challenge.***
p.s. If you have a blog, post your entry and a link to the ABS challenge to spread the beady goodness.
April Monthly Challenge
4 Comments
By Art Bead Scene Team 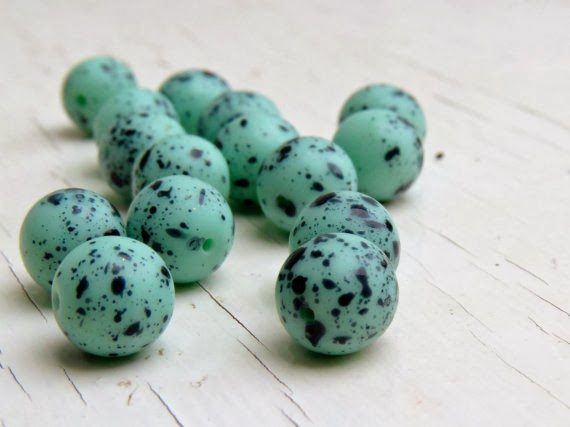