Tres Personajes, (Three People) 1970
Rufino Tamayo
Oil on Canvas 51″ × 38″
(Please note this art is copyrighted and is to be used only as inspiration.)
About the Art
Painted in 1970, Tres Personajes is regarded as a masterpiece of the artist’s mature period, the synthesis and culmination of a career and a celebration of his approach to universalism in art via color, abstraction and texture. It is an abstract depiction of a man, a woman and an androgynous figure in a rich palette of purple, orange and yellow, with Tamayo’s signature rough surface texture, made of sand and ground marble dust mixed into the paint.
Carmen Melián, Head of the Latin American Art department at Sotheby’s, said, “Tamayo introduced abstraction as a possibility in Mexican modernism at a time when the prevalent style was figurative work. Tamayo emphasized formalism while illustrating Mexico’s indigenous past, managing to combine aspects of the modern avant-garde with the language of the native Amerindian cultures, making use of the colors of Mexico in a modern way.”
This painting is featured on the cover of the 1974 book by art historian Emily Genauer, Rufino Tamayo, the most important monograph in English addressing the artist’s career. The work was exhibited in a 1974-75 exhibition, Cent Oeuvres de Tamayo (One Hundred Works by Tamayo), in Paris at the Musée d’Art Moderne de la Ville de Paris and in Florence at the Palazzo Strozzi.
Rufino Tamayo’s masterpiece found on streets of New York for sale at Sotheby’s “Tres personajes” estimated at $750,000 – 1 million…Read more
About the Artist
Tamayo was born in 1899 and began his career as a figurative painter when he was in his 20s. In the 1930’s, Tamayo began visiting New York, and he continued to travel between the United States and Mexico for much of his career. Tamayo’s lasting legacy to art history is the re-examination of Cubism and the explication of Mexico’s pre-Columbian history while incorporating elements of the mainstream movements of 20th century art. Tamayo is known for his vivid coloring and innovative use of texture, often incorporating sand and raw pigment into his works.
Tamayo himself was an extensive collector of American post-war artists. One of his lasting legacies is the Museo Tamayo Arte Contemporáneo in Mexico City, which not only displays his works and a collection of 20th century art, but also is one of the premiere collections of Contemporary art in Mexico City. The museum will hold a Tamayo retrospective, Tamayo: A Modern Icon Reinterpreted, from October 26, 2007-January 21, 2008. In his native Mexico, Tamayo is known as a pioneer of modern art and as one of the most important painters of the 20th century.
Blog Tour
The Blog Tour deadline is August 28th.
Links must be added to the Art Bead Scene flickr page where you upload your entry.
The Blog Tour will be on August 30th.
Monthly Challenge Winners
Winners will be randomly chosen from all the qualifying entries on September 1st.
Our Sponsors
Our Sponsors this month are Skye Jewels and Slate Studio Supply.
Please visit us tomorrow to see the prizes!
Featured Designer of the Week:
From all the entries during the month, an editor is going to pick their favorite design to be featured every Monday here on ABS. We want to give our participants more time in the spotlight! Our Featured Designer will be this Monday, so get those entries in soon.
How to enter the Monthly Challenge:
1. Create something using an art bead that fits within our monthly theme. We post the art to be used as your inspiration to create. This challenge is open to jewelry-makers, fiber artists, collage artist, etc. The art bead can be created by you or someone else. The challenge is to inspire those who use art beads and to see all the different ways art beads can be incorporated into your handiwork.
An Art Bead must be used in your piece to qualify for the monthly challenge.
***Beads strung on a chain, by themselves and beads simply wire or cord will not be accepted.***
2. Upload your photo to our flickr group. Detailed instructions can be found here and click here for a tutorial for sending your picture to the group.
Please add the tag or title AUG ABS to your photos. Include a short description, who created the art beads and a link to your blog, if you have one.
Deadline is August 31st. Photos are approved by our moderators, if a photo hasn’t followed the guidelines it will not be approved. You may upload 2 photos a day.
What is an Art Bead?
An art bead is a bead, charm, button or finding made by an independent artist. Art beads are the vision and handiwork of an individual artist. You can read more about art beads here.
***A bead that is handmade is not necessarily an art bead. Hill Tribe Silver, Kazuri ceramic beads or lampwork beads made in factories are examples of handmade beads that are not considered art beads.
Beaded beads, stamped metal pendants or wire-wrapped components are not considered art beads for our challenge.***
p.s. If you have a blog, post your entry and a link to the ABS challenge to spread the beady goodness.
August Monthly Challenge
4 Comments
By Art Bead Scene Team 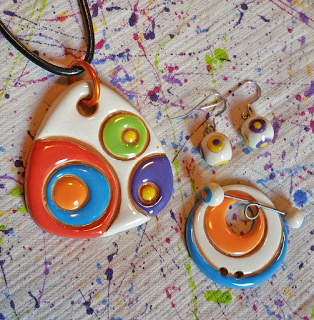 Want to be an ABS Sponsor?