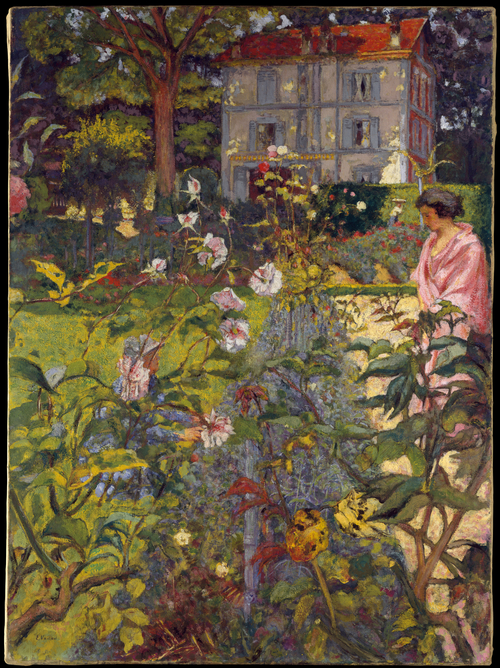 About the Art
With its riot of flowers in the foreground, Morning in the Garden at Vaucresson hearkens back—as do many of Edouard Vuillard’s post-World War I paintings—to the Impressionist garden scenes of Claude Monet and Pierre Auguste Renoir. It depicts the country home and garden of Jos and Lucie Hessel, an art dealer and his wife with whom Vuillard shared a long friendship. The Hessel estate was located near the Closerie des Gênets, a villa that Vuillard and his mother rented during the summer months. The figure crouching behind a riot of pink roses is Lucie Hessel herself, depicted working in the garden. Although Vuillard began the painting in 1923, he reworked it 14 years later for a retrospective exhibition in 1938. It was first exhibited in the United States at the New York World’s Fair of 1939.” –Art Institute of Chicago
About the Artist
Jean-Édouard Vuillard, the son of a retired captain, spent his youth at Cuiseaux (Saône-et-Loire); in 1878 his family moved to Paris in modest circumstances. After his father’s death in 1884, Vuillard received a scholarship to continue his education. In the Lycée Condorcet, Vuillard met Ker Xavier Roussel (also a future painter and Vuillard’s future brother in law), Maurice Denis, musician Pierre Hermant, writer Pierre Véber, and Aurélien Lugné-Poë.
In 1885, Vuillard left the Lycée Condorcet. On the advice of his closest friend, Roussel, he refused a military career and joined Roussel at the studio of painter Diogène Maillart. There, Roussel and Vuillard received the rudiments of artistic training. In 1887, after three unsuccessful attempts, Vuillard passed the entrance examination for the Ecole des Beaux-Arts.
By 1890, the year in which Vuillard met Pierre Bonnard and Paul Sérusier, he had joined the Nabis, a group of art students inspired by the synthetism of Gauguin.[3] He contributed to their exhibitions at the Gallery of Le Barc de Boutteville, and later shared a studio with fellow Nabis Bonnard and Maurice Denis. In the early 1890s he worked for the Théâtre de l’Oeuvre of Lugné-Poë designing settings and programs.
Vuillard first exhibited at the Salon des Indépendants of 1901 and at the Salon d’Automne in 1903. In the 1890s Vuillard met the brothers Alexandre and Thadée Natanson, the founders of the Revue Blanche. In 1892, on their advice, Vuillard painted his first decorations (“apartment frescoes”) for the house of Mme Desmarais. Subsequently he fulfilled many other commissions of this kind: in 1894 for Alexandre Natanson, in 1898 for Claude Anet, in 1908 for Bernstein, and in 1913 for Bernheim and for the Théâtre des Champs-Elysées. The last commissions he received date to 1937 (Palais de Chaillot in Paris, with Bonnard) and 1939 (Palais des Nations in Geneva, with Denis, Roussel and Chastel).
In his paintings and decorative pieces Vuillard depicted mostly interiors, streets and gardens. Marked by a gentle humor, they are executed in the delicate range of soft, blurred colors characteristic of his art. Living with his mother, a dressmaker, until the age of sixty, Vuillard was very familiar with interior and domestic spaces. Much of his art reflected this influence, largely decorative and often depicting very intricate patterns.
Color Palette 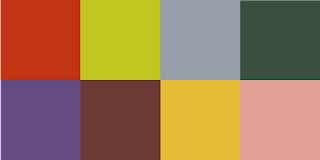 Blog Tour
The Blog Tour deadline is July 28th.
Links must be added to the monthly challenge post comments.
The Blog Tour will be on the 29th.

Winners will be randomly chosen from all the qualifying entries on August 1st.
Our Sponsors
Our sponsors this month are: Kylie Parry Studio, Kristi Bowman Design,
Kerri Fuhr Handcrafted Glass Beads and
Creative Impressions In Clay.
Please visit us tomorrow to see the prizes!
Featured Designer of the Week:
From all the entries during the month, an editor is going to pick their favorite design to be featured every Monday here on the ABS. We want to give our participants more time in the spotlight! Our Featured Designer will be this Monday, so get those entries in soon.
How to enter the Monthly Challenge:
1. Create something using an art bead that fits within our monthly theme. We post the art to be used as your inspiration to create. This challenge is open to jewelry-makers, fiber artists, collage artist, etc. The art bead can be created by you or someone else. The challenge is to inspire those who use art beads and to see all the different ways art beads can be incorporated into your handiwork.
***Beads strung on a chain, by themselves and beads simply wire or cord will not be accepted.***
2. Upload your photo to our flickr group. Detailed instructions can be found here and click here for a tutorial for sending your picture to the group.

Please add the tag or title JULY ABS to your photos. Include a short description, who created the art beads and a link to your blog, if you have one.

Deadline is June 30th. Photos are approved by our moderators, if a photo hasn’t followed the guidelines it will not be approved. You may upload 2 photos a day.
What is an Art Bead?
An art bead is a bead, charm, button or finding made by an independent artist. Art beads are the vision and handiwork of an individual artist. You can read more about art beads here.
***A bead that is handmade is not necessarily an art bead. Hill Tribe Silver, Kazuri ceramic beads or lampwork beads made in factories are examples of handmade beads that are not considered art beads.
Beaded beads, stamped metal pendants or wire-wrapped components are not considered art beads for our challenge.***
p.s. If you have a blog, post your entry and a link to the ABS challenge to spread the beady goodness.
July monthly challenge
10 Comments
By Art Bead Scene Team

Featured Designer of the Week 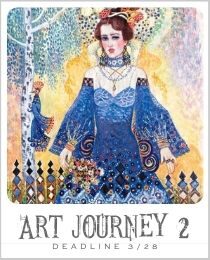