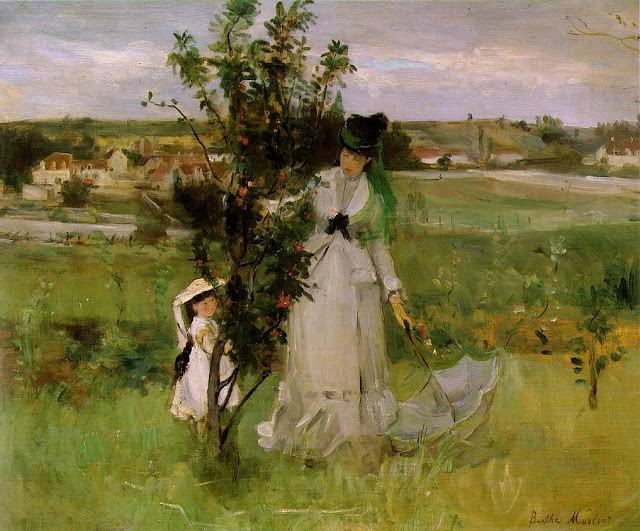 Cache-cache (Hide-and-Seek), 1873
by Berthe Morisot
Oil on Canvas, 18 1/4″ x 21 3/4″
About the Art
The models are Berthe Morisot’s sister Edma and Edma’s daughter Jeanne.
An oil painting, of a young mother playing hide-and-seek behind a cherry tree with her little girl, is a work that is perfect in the emotion of its observation, the freshness of its palette and the composition of its background.
[Philip Burty], La Republique Francaise, 24 April 1874

French painter and printmaker. The first woman to join the circle of the French impressionist painters, she exhibited in all but one of their shows, and, despite the protests of friends and family, continued to participate in their struggle for recognition.
Born into a family of wealth and culture, Morisot received the conventional lessons in drawing and painting. She went firmly against convention, however, in choosing to take these pursuits seriously and make them her life’s work. Having studied for a time under Camille Corot, she later began her long friendship with Edouard Manet, who became her brother-in-law in 1874 and was the most important single influence on the development of her style. Unlike most of the other impressionists, who were then intensely engaged in optical experiments with color, Morisot and Manet agreed on a more conservative approach, confining their use of color to a naturalistic framework. Morisot, however, did encourage Manet to adopt the impressionists’ high-keyed palette and to abandon the use of black. Her own carefully composed, brightly hued canvases are often studies of women, either out-of-doors or in domestic settings. Morisot and American artist Mary Cassatt are generally considered the most important women painters of the later 19th century.
Color Palette

Blog Tour
The Blog Tour deadline is May 29th.
Links must be added to the monthly challenge post comments.
The Blog Tour will be on the 30th.

Winners will be randomly chosen from all the qualifying entries on June 1st.
Our Sponsors
Our sponsors this month are: Chinook Jewelry, and Gardanne Beads please visit us tomorrow to see the prizes!
Featured Designer of the Week:
From all the entries during the month, an editor is going to pick their favorite design to be featured every Monday here on the ABS. We want to give our participants more time in the spotlight! Our Featured Designer will be this Monday, so get those entries in soon.
How to enter the Monthly Challenge:
1. Create something using an art bead that fits within our monthly theme. We post the art to be used as your inspiration to create. This challenge is open to jewelry-makers, fiber artists, collage artist, etc. The art bead can be created by you or someone else. The challenge is to inspire those who use art beads and to see all the different ways art beads can be incorporated into your handiwork.
***Beads strung on a chain, by themselves and beads simply wire or cord will not be accepted.***
2. Upload your photo to our flickr group. Detailed instructions can be found here and click here for a tutorial for sending your picture to the group.

Please add the tag or title MAY ABS to your photos. Include a short description, who created the art beads and a link to your blog, if you have one.

Deadline is May 31st. Photos are approved by our moderators, if a photo hasn’t followed the guidelines it will not be approved. You may upload 2 photos a day.
What is an Art Bead?
An art bead is a bead, charm, button or finding made by an independent artist. Art beads are the vision and handiwork of an individual artist. You can read more about art beads here.
***A bead that is handmade is not necessarily an art bead. Hill Tribe Silver, Kazuri ceramic beads or lampwork beads made in factories are examples of handmade beads that are not considered art beads.
Beaded beads, stamped metal pendants or wire-wrapped components are not considered art beads for our challenge.***
p.s. If you have a blog, post your entry and a link to the ABS challenge to spread the beady goodness.
May Monthly Challenge
14 Comments
By Art Bead Scene Team

Amuse the Muse – Leaf and Tree Beads – with Rebecca of Songbead

The Bead Biz- Opening a Gallery- The first Steps