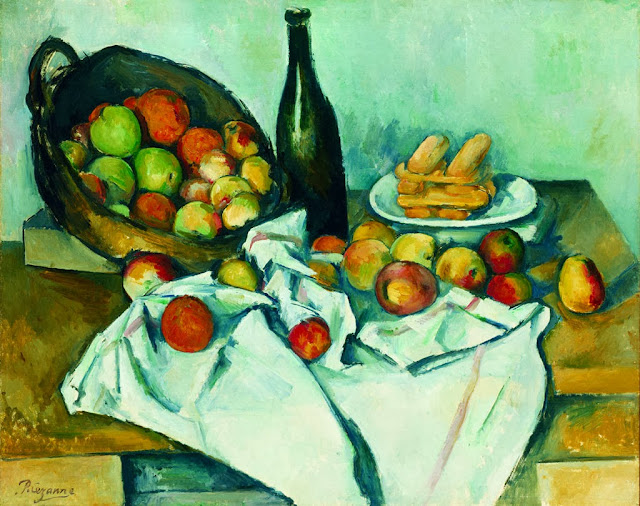 Basket of Apples by Paul Cézanne, 1893
Oil on canvas 65 cm × 80 cm (25.6 in × 31.5 in)
Helen Birch Bartlett Memorial Collection, Art Institute of Chicago
About the Art
Cézanne sought out the structural regularity of his subjects. By repeating the round and angular shapes in The Basket of Apples, the artist demonstrated his formalist approach.
Despite his attention to the shapes and structures of his subjects, Cézanne animated the objects in the painting. He placed the basket of apples on one of his characteristic tilted tables; it careens forward from a slablike base that appears to upset rather than support it. Upon closer inspection, the tabletop seems to be fractured, since it emerges on the right side at a different level than on the left. Cézanne’s use of geometric form and disjointed perspective made him an inspiration to Pablo Picasso, Cubism, and abstract art of the 20th century.
This painting is most notable for the disjointment of perspective, as if the two sides of the painting were completed using two different points of view. The right side of the table is not in the same plane as the left side of the table, which was a stylized method used by Cézanne to incorporate the differences of viewpoint into an impressionistic still life. It was this technique that made it possible to bridge the gap between impressionists and cubism, which employed varying perspective and varying angles to depict subjects. As such, this still life is an example of the way in which Cézanne tried to deal with the complexities of visual perception.
About the Artist
Paul Cézanne  1839-1906, was a post-impressionist painter who created the bridge between impressionism and cubism, and is said to be the artistic father of both Matisse and Picasso. Although he was dissuaded by his father at an early age to pursue his passions in painting, he left his hometown of Provence for Paris, in 1861. It was there that he met Camille Pisarro, a popular impressionist painter, who served as his mentor and guide. He began painting in the impressionistic style, but later began to structurally order what he saw and painted into simple forms and planes of color. He also began to simplify the forms he painted into shapes, such as a tree into a column. Unlike many of the painters of his day, who focused on one or maybe two subject styles, Cézanne concentrated on still lifes, portraits, landscapes, and nude studies.
He began slowly in Paris, as all of his submissions to the Paris Salon between the years of 1864 and 1869 went rejected. He finally successfully entered a submission into the Paris Salon in 1882, which was also his last. In 1895, there was an exhibition held of all of his own works, signifying his growing success as an artist, but that same year he moved back to his hometown of Provence, where he continued to work in isolation.
Cézanne was early depicted as a rude, shy, angry man, given to bouts of depression, and later in his life he withdrew into his paintings, spending long periods of time a recluse, painting in solitude. Although his paintings were not well-received by the public, who supposedly reacted with hilarity, outrage and sarcasm, and laughed at his art, young artists held him in high esteem, and often sought after him. Cézanne s legacy is that he developed the practice of fracturing forms, which most immediately influenced the development of cubism, and later the foundation of modern art.
Our Sponsors
Our Sponsors this month are Swoondimples and Captured Moments.
Please visit us tomorrow to see the prizes!
Monthly Challenge Recap
• Please post at least one single shot of your creation in the Flickr pool. This will be used to make a collage for the Monthly Challenge Gallery. Every creation will be added to the collage, regardless of a blog post. So everyone gets included!
• Be sure to share with us the name of the art bead artist in the description of your photo so that if you are selected for the weekly Perfect Pairings on Mondays, both you as the designer and the art bead artist can get the credit you both deserve!
• An InLinkz button will be added to the bottom of the Monthly Challenge Recap post. Here you will be able to link up your blog post if you have one. It is no longer necessary to add your blog post URL to the description unless you want to. Be sure to hop around and see all the great inspiration and leave some comment love!
• The Monthly Challenge Recap with Blog Tour will be posted on November 29th.

Perfect Pairings :: Designer + Art Bead Artist
• Formerly the Featured Designer of the Week, our new Perfect Pairings will now focus on both the jewelry designer and the art bead artist. Be sure to point out all the art bead artists in your work in the description of the photo in the Flickr pool. Links to their website or shop are appreciated. That way we can all find new art beads to love!
• From all the entries during the month, an editor will pick their favorite design to be featured every Monday here on ABS, so get those entries in soon.

How to enter the Monthly Challenge:
1. Create something using an art bead that fits within our monthly theme. We post the art to be used as your inspiration to create. This challenge is open to jewelry-makers, fiber artists, collage artist, etc. The art bead can be created by you or someone else. The challenge is to inspire those who use art beads and to see all the different ways art beads can be incorporated into your handiwork.
An Art Bead must be used in your piece to qualify for the monthly challenge.
***Beads strung on a chain, by themselves and beads simply added to wire or cord will not be accepted.***
2. Upload your photo to our flickr group. Detailed instructions can be found here and click here for a tutorial for sending your picture to the group.
Please add the tag or title NOV ABS to your photos. Include a short description, who created the art beads and a link to your blog, if you have one.
Deadline is November 30th. Photos are approved by our moderators, if a photo hasn’t followed the guidelines it will not be approved. You may upload 2 photos a day.
What is an Art Bead?
An art bead is a bead, charm, button or finding made by an independent artist. Art beads are the vision and handiwork of an individual artist. You can read more about art beads here.
***A bead that is handmade is not necessarily an art bead. Hill Tribe Silver, Kazuri ceramic beads or lampwork beads made in factories are examples of handmade beads that are not considered art beads.
Beaded beads, stamped metal pendants or wire-wrapped components are not considered art beads for our challenge.***
p.s. If you have a blog, post your entry and a link to the ABS challenge to spread the beady goodness.
monthly challengeNovember Monthly Challenge
By Art Bead Scene Team 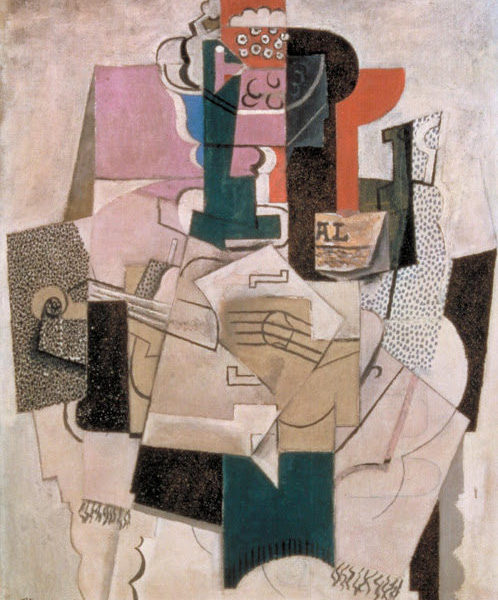