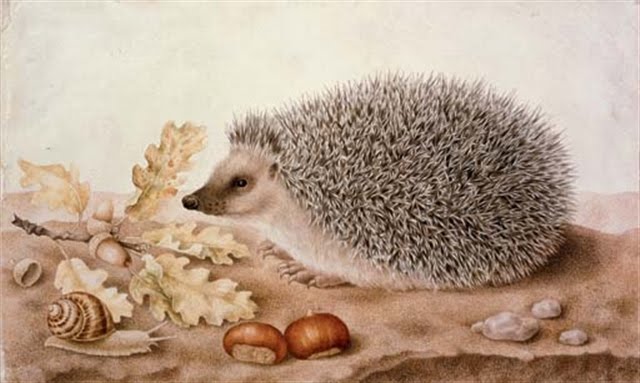 A Hedgehog in a Landscape, 1643-51
9¼ x 15 in. 23.5 x 38 cm. bodycolor on vellum
by Giovanna Garzoni
About the Art
Garzoni’s paintings depict plants with their roots and flowers, in the scientific tradition of Ligozzi, but she animates her compositions by adding insects, reptiles, and small fruits and nuts, each casting a faint shadow on the page. Overflowing ceramic bowls of fruit were another favorite theme, containing fruits that were sought after in the seventeenth century to grace the tables of the aristocracy not only as a pleasure to the palate but also as a delight to the eye.
These vibrant paintings display a conscious yet subtle balance between scientific realism and decorative effect.

One of the first women artists to practice the art of still life painting, Giovanna Garzoni pursued her career with intensity. Garzoni’s paintings were so well liked that, according to one writer, she could sell her work “for whatever price she wished.” One of Garzoni’s earliest works, a 1625 calligraphy book, includes capital letters illuminated with fruits, flowers, birds, and insects. These subjects were to become her specialty, and tempera on vellum was her preferred medium. Garzoni’s refined
interpretation of plants and animals suited the taste of her aristocratic patrons, like the Medici family, and could be found decorating their villas.
She may have begun her training in Ascoli Piceno. In a letter written in the 1620s, she identified the otherwise unknown Giacomo Rogni as her teacher. The theory that she studied miniature painting in Florence with Jacopo Ligozzi is no longer accepted, although she must have seen his exquisite nature studies when she was later at the Medici court. In 1625, and again in 1630, she was in Venice, where she painted a miniature Portrait of a Young Man (1625; The Hague, Willem V Mus.) and wrote a small textbook on calligraphy (Rome, Gal. Accad. N. S Luca). By the late 1620s she had two influential patrons in Rome: Cassiano dal Pozzo and Anna Colonna, wife of Taddeo Barberini. She went to Naples in 1630, to work for the Duque de Alcal, and was still there a year later, when in a letter to dal Pozzo she expressed her desire to ‘live and die in Rome’. However, she spent the next five years in Turin at the court of Charles Emanuel II, Duke of Savoy. She left Turin in 1637, probably for Florence; documents indicate that she was there from 1643. She continued to work for members of the Medici court after finally settling in Rome in 1651. There she was a loyal supporter of the Accademia di S Luca, to which she bequeathed her property on condition that a monument to her be placed in the Accademia’s church, SS Luca e Martina.
She died four years later, after enjoying a life of steady work and constant success.
The monument was set up in 1698.
Color Palette 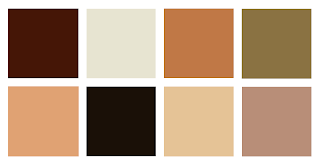 Blog Tour
The Blog Tour deadline is October 26th.
Links must be added to the monthly challenge post comments (this post)..
The Blog Tour will be on the 28th.

Winners will be randomly chosen from all the qualifying entries on November 1st.
Our Sponsors
Our sponsors this month are: Marsha Neal Studio and Humblebeads.
Please visit us Monday to see the prizes!
Featured Designer of the Week:
From all the entries during the month, an editor is going to pick their favorite design to be featured every Monday here on the ABS. We want to give our participants more time in the spotlight! Our Featured Designer will be this Monday, so get those entries in soon.
How to enter the Monthly Challenge:
1. Create something using an art bead that fits within our monthly theme. We post the art to be used as your inspiration to create. This challenge is open to jewelry-makers, fiber artists, collage artist, etc. The art bead can be created by you or someone else. The challenge is to inspire those who use art beads and to see all the different ways art beads can be incorporated into your handiwork.
***Beads strung on a chain, by themselves and beads simply wire or cord will not be accepted.***
2. Upload your photo to our flickr group. Detailed instructions can be found here and click here for a tutorial for sending your picture to the group.

Please add the tag or title OCT ABS to your photos. Include a short description, who created the art beads and a link to your blog, if you have one.

Deadline is September 30th. Photos are approved by our moderators, if a photo hasn’t followed the guidelines it will not be approved. You may upload 2 photos a day.
What is an Art Bead?
An art bead is a bead, charm, button or finding made by an independent artist. Art beads are the vision and handiwork of an individual artist. You can read more about art beads here.
***A bead that is handmade is not necessarily an art bead. Hill Tribe Silver, Kazuri ceramic beads or lampwork beads made in factories are examples of handmade beads that are not considered art beads.
Beaded beads, stamped metal pendants or wire-wrapped components are not considered art beads for our challenge.***
p.s. If you have a blog, post your entry and a link to the ABS challenge to spread the beady goodness.
October Monthly Challenge
13 Comments
By Art Bead Scene Team