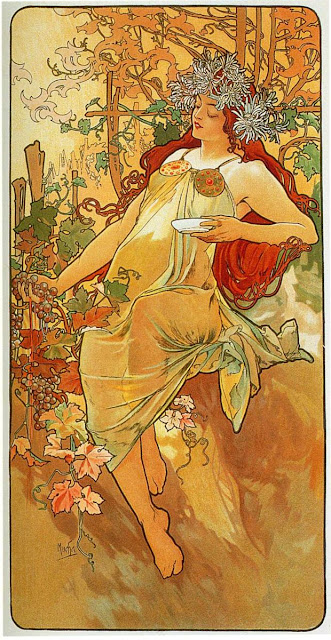 Autumn from  “The Seasons (series)“, 1896
Alphonse Mucha
Oil on Panel
About the Art
This was Mucha’s first set of decorative panels and it
became one of his most popular series. It was so popular that Mucha was
asked by Champenois to produce at least two more sets based on the same
theme in 1897 and 1900. Designs for a further two sets also exist.
The
idea of personifying the seasons was nothing new – examples could be
found in the works of the Old Masters’ as well as in Champenois’s other
publications. However, Mucha’s nymph-like women set against the seasonal
views of the countryside breathed new life into the classic theme. In
the four panels shown here, Mucha captures the moods of the seasons –
innocent Spring, sultry Summer, fruitful Autumn and frosty Winter, and
together they represent the harmonious cycle of Nature. (Mucha
Foundation: “The Seasons (series)”)
Mucha used lithography as the printing technique for
his posters. The posters are usually signed in the
block. Some of his posters were produced as sets like
The Four Seasons. Complete sets count among the most
searched for of his works.
About the Artist
Alfons Maria Mucha was born in Ivancice, a small
provincial town in the Czech Republic. He started his artistic in stage decorations and decorative paintings. He studied at the Munich Academy of
Fine Arts from 1885 until 1887.After Munich, Mucha moved to the “mecca” of arts, Paris.
Here he studied with different teachers and worked on small
commissions for book and newspaper illustrations.
In December 1894 Mucha became famous with
a commission for a poster for the actress Sarah
Bernard. Sarah Bernard was a celebrity of her time.
He received an exclusive six year contract by the actress not only designing all her
posters, but her theater decorations and costumes
as well. From now on the artist was swamped with commissions
for all kind of commercial print advertising.
During the course of the next 10 years, Mucha became one of the most
popular and successful of Parisian artists. Commissions flooded in – for
theatre posters, advertising posters, decorative panels, magazine
covers, menus, postcards, calendars. Mucha’s designs for jewellery,
cutlery, tableware, fabrics etc were in so much demand that he conceived
the idea of creating a ‘handbook for craftsmen’, which would offer all
the necessary patterns for creating an Art Nouveau lifestyle.
Between 1904 and 1921 Mucha traveled frequently to
the United States, during this time he married and had a daughter. Mucha returned to Bohemia in 1910.  He spent a large part of the remainder of his life creating the 20 paintings which make up the Slav Epic.
These monumental paintings, some of which measure as much as 6 by 8
metres, celebrate more than a thousand years of Slav history, divided
between specifically Czech themes and those of other Slav peoples. The
canvases were completed between 1912 and 1926 and in 1928 Mucha and
Charles Crane officially presented the Slav Epic as a gift to the City of Prague.
In 1939 the German Nazis occupied Czechoslovakia. The
popularity of the artist made him a number one target
for the Gestapo, the Nazi secret police. He was arrested, interrogated
and realeased. Shortly afterwards,
Alphonse Maria Mucha died on July 14, 1939 in Prague. His Slav Epic paintings were hidden away at the beginning of the war and lost to the art world until 1968 when they were placed on permanent exhibition in the castle of Moravsky Krumlo.
(Resources: Artelino and the Mucha Foundation.)
Blog Tour
The Blog Tour deadline is September 27th.
Links must be added to the Art Bead Scene flickr page where you upload your entry.
The Blog Tour will be on September 30th.
Monthly Challenge Winners
Winners will be randomly chosen from all the qualifying entries on October 1st.
Our Sponsors
Our Sponsors this month are Songbead and Mary Harding Jewelry.
Please visit us tomorrow to see the prizes!
Featured Designer of the Week:
From
all the entries during the month, an editor is going to pick their
favorite design to be featured every Monday here on ABS. We want to give
our participants more time in the spotlight! Our Featured Designer will
be this Monday, so get those entries in soon.
How to enter the Monthly Challenge:
1. Create
something using an art bead that fits within our monthly theme. We post
the art to be used as your inspiration to create. This challenge is
open to jewelry-makers, fiber artists, collage artist, etc. The art bead
can be created by you or someone else. The challenge is to inspire
those who use art beads and to see all the different ways art beads can
be incorporated into your handiwork.
An Art Bead must be used in your piece to qualify for the monthly challenge.
***Beads strung on a chain, by themselves and beads simply wire or cord will not be accepted.***
2. Upload your photo to our flickr group. Detailed instructions can be found here and click here for a tutorial for sending your picture to the group.
Please add the tag or title SEP ABS to your photos. Include a short description, who created the art beads and a link to your blog, if you have one.
Deadline is September 30th. Photos are approved by our moderators, if a photo hasn’t followed the guidelines it will not be approved. You may upload 2 photos a day.
What is an Art Bead?
An
art bead is a bead, charm, button or finding made by an independent
artist. Art beads are the vision and handiwork of an individual artist.
You can read more about art beads here.
***A
bead that is handmade is not necessarily an art bead. Hill Tribe
Silver, Kazuri ceramic beads or lampwork beads made in factories are
examples of handmade beads that are not considered art beads.
Beaded beads, stamped metal pendants or wire-wrapped components are not considered art beads for our challenge.***
p.s. If you have a blog, post your entry and a link to the ABS challenge to spread the beady goodness.
monthly challengeSeptember Monthly Challenge
2 Comments
By Art Bead Scene Team 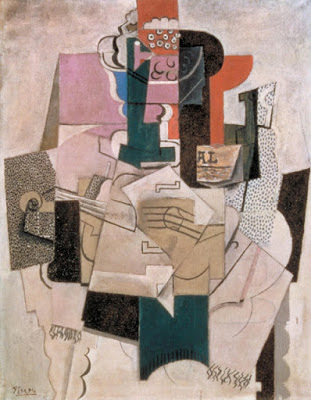